An official statement on education funding by the Baltimore City Green Party.

The 2017 Maryland General Assembly legislative session has come to a close, and the Baltimore City Public School system remains millions of dollars in the hole. Although leaders were able to bring about some additional revenues, they failed to right the ship. Both Larry Hogan (R) and Cathy Pugh (D) must be put on notice: You HAVE NOT done what needs to be done for our children.

Mayor Pugh started from a place of compromise, and compromise is what we got. We will have fewer teachers and activities, weaker unions, fewer support staff, bigger class sizes, and less of what our children need. 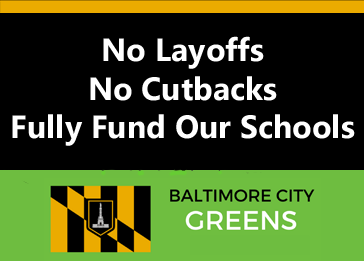 The political establishment has a deficit mentality when it comes to fully funding City Schools. It's a recipe for failure, as every hardworking teacher knows. Real political leadership means ending this mentality, and fully funding our schools.

The funding gap was the result of choices and priorities. For years, the state and the city chronically underfunded the school system while prioritizing the police budget and pet projects, such as waterfront development.

Baltimore City has been particularly affected by the use of Tax Increment Financing. In its zeal to subsidize development projects, city leaders failed to recognize the devastating effect that TIFs would have on our children. The TIF-funded projects increased the assessed value of Baltimore’s tax base, resulting in less overall state money, but the City did not have any additional funds to put toward the school system1.The use of TIFs by Council President Jack Young and other elected Democrats has drained resources from our schools while lining the pockets of wealthy developers. Despite the talking points offered by opponents of public schools, fiscal mismanagement  was not the cause of the Baltimore City Schools budget gap. According to the ACLU of Maryland, the gap comes from the State’s underfunding and  structural neglect of City Schools2. BCPSS would have been getting an additional $290 million per year had the state not cut back on the Thornton formula3. The state’s Adequacy Study recommends an overall increase of 25% in state spending on education4. Chronic underfunding of our school districts remains the culprit. The issue is NOT mismanagement, but  chronic underfunding5.

Additionally, Baltimore city is the only jurisdiction in the state that spends more money (almost twice as much)  on police than it does on schools. And The Baltimore Police Department, under a Federal Consent Decree,  is controlled by the State. Recent scandals have drawn attention to what the city has known for a long time. The police budget, especially overtime, is an open and leaky drain on the city’s strained budget, and is beyond the control of city government, much less the community.

The Mayor and City Council should fund the remaining gap in Baltimore’s money by taking any deficit directly from the police budget. Time and time again Democrats and Republicans both have shown that they will happily find funding for police that they seldom find for education. City Council President Jack Young proposed moving $10 million from the police budget to the school budget6. While the gesture is a start, it is far from adequate given the size of the school shortfall. Nothing more than a complete closing of the gap will suffice. The purpose here is not to make small changes to the balance of funding between the police and schools, but to ensure that both are fully funded. Taking a large sum from the police budget will not lead to a police funding crisis. We have no doubt that once sufficient state scrutiny of the police department is done the General Assembly and the Governor will, unlike with our schools, find the political will and mechanisms to fund the department.

Furthermore, all future budget gaps should be prioritized in this manner: children and youth come first. Education, not incarceration.

The Mayor and the City Council should place a moratorium on all TIFs and PILOTs until a permanent funding solution is worked out between the City and the State.

Any path other than this is a compromise we cannot afford. We believe that budgets are about priorities, and that when given the choice of investing our city’s money in schools or our police, Baltimore City should always say schools come first.

We need bold and progressive leadership now. We need the Mayor and the Council to do more, and we need to avoid compromising our schools and our future with Larry Hogan, Catherine Pugh or the Trump administration. The only choice is for Baltimore's leaders to step up and get its priorities straight.

The Baltimore Green Party joins with parents, teachers, advocates and the youth to amplify their sensible demand, “Children and Youth FIRST. Education, not incarceration. Fully-fund our schools!”