Baltimore, MD-  Yesterday afternoon at the first ever Baltimore City College Mayoral Straw Poll and Youth Summit, Joshua Harris, Green Party candidate for Mayor of Baltimore emerged victorious. Harris received over 28% of the vote among 17 candidates. The event was co-sponsored by three student groups- The BCC Democrats, CityBloc, and SOMOS- and numerous community organizations including CASA de Maryland and the Campaign For Justice, Safety, and Jobs.

Over 250 students, educators, and community members attended the event which featured opportunities for each candidate to engage directly with the audience for over an hour followed by a 90 second ”Elevator Pitch” from each candidate. At the conclusion of this process each participant had the opportunity to vote for the candidate of their choice.

" This is the purest form of grassroots ‎democracy. This generation does not entertain respectability politics," explains Joshua Harris Green Party Candidate for Mayor. "The youth are educated and aware and they will call you out if they feel you are being dishonest. I believe they recognize that the city needs leadership that is honest, straight forward, and committed to people first, and that's me."

Baltimore Green Party Co-Chair Andy Ellis who attended the event as an observer said “Joshua Harris’s victory today shows the power of a new vision for Baltimore based in Green Values. The young people who participated in this event are as engaged as any voters in the city. They know that it is their future that is on the line in this election.” Ellis also added “The Baltimore Green party will continue to work with young voters as we move forward toward our May 1st primary and the General Election in November. For A Green Party candidate to win a straw poll in a city which has only elected Democrats for at least five decades, is a turning point in our efforts to bring democracy back to our city.”

Joshua Harris is one of three Green Party Candidates seeking the Mayoral nomination from the Baltimore Green Party. The other two candidates, Emanuel McCray and David Marriott were not in attendance at todays event. Because Maryland does not allow third parties to have tax-payer funded primaries the Green Party runs its own primary process. Early voting occurs during the month of April and in person voting occurs on May 1st. More information about the Baltimore Green Party primary process can be found at www.baltimoregp.org.

More Information about Harris can be found at www.harrisforbaltimore.com.

A video of Harris’s 90 second speech is available at https://www.periscope.tv/bmoreconnected/1ynKOeDqZnvJR 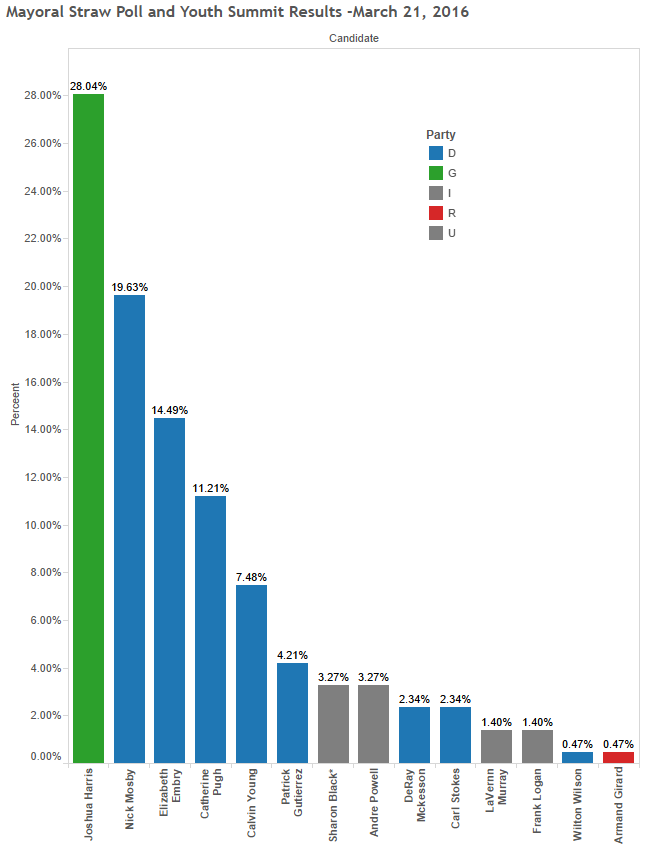