Baltimore, MD – The residents of Douglass Homes were denied their right to a Tenant’s Council election last December. Although residents volunteered to run, the Baltimore City Housing Authority found all of them to not be “in good standing.” When requests were made to see bylaws that defined what it means to be in good standing, none were produced. The Housing Authority proceeded to appoint a Tenant Council president who does not represent the will of the tenants.

Denied their rights to participation, tenants created a Tenant’s Committee and have continued to call for a valid election. However, a series of new rules have infringed upon their rights to even hold meetings on the property. Other new rules make life in Douglass Homes during the summer almost unbearable – no Bar-B-Ques, not even an electric indoor grill; no kiddie pools and no screen doors.

In a recent meeting at the Orleans Library, residents spoke about units that have not been cleaned since residents who lived in them died, bringing cockroaches to the buildings. They also spoke about new rules banning smoking in their own homes. Residents can face eviction if a person smokes in front of their home.

Tenants have decided to make the living conditions and lack of democracy public. They are holding a picket outside Douglass Homes Friday, July 28 from 11:30 am to 1:30 pm as a first action. This is part of National Days of action organized through the National Low Income Housing Coalition. Their demands are a Tenant's Council election and repeal of the draconian rules.

Rev. Annie Chambers, the sole elected representative of Douglass Homes as delegate to the Resident Advisory Board, says, “I am asking anyone from the media and anyone else to come out and help us. We vow that we will continue to fight until we have an election. We demand an Tenant’s Council election.” 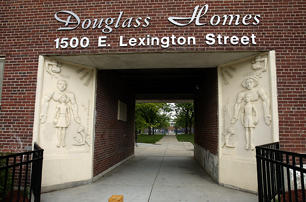