The Baltimore Democrats Have Failed Us Again

Connor Meek is an avid follower of Baltimore City Council and is BGP's resident correspondent on municipal events and hearings.

While campaigning for office, Catherine Pugh promised to raise Baltimore’s minimum wage to $15 per hour, stating in an AFT-Maryland survey, “I am aware of the current initiative to raise the minimum wage in the City Council to $15 per hour and when it reaches my desk I will sign it.”  Yet when a watered down bill that was too low and too slow reached her desk she promptly vetoed it.  The City Council needs twelve votes to override the veto, and only ten votes to hold a special session to deliberate.  They have seven.

Which means that twelve members of the Baltimore City Council believed in raising the minimum wage with such sincerity that many of them campaigned for office on the principle, held public hearings, conducted research, engaged in debates, and after months of deliberation they still supported the Fight for $15 enough to draft legislation and vote in favor of ratifying it, not once, but three times.  Then at some point between March 20th when the bill was passed and April 3rd when the council failed to override the veto, many of them changed their minds.  It’s possible that Mayor Pugh produced an incredible new argument at the last minute, swaying several long standing Council Members.  It’s also possible, and more likely, that many of our legislators lack the sincerity and determination needed to truly advocate for the working poor.  I think our esteemed President Jack Young said it best:  "I voted for the bill. I did what I was supposed to do. I'm not twisting any arms."

Councilman Ed Reisinger cited the mayor’s “very persuasive arguments” when defending his decision not to override her veto, explaining that the city “doesn’t have a money tree,” but that argument’s only valid if the city’s money tree died at some point between the 20th, when he shook my hand and told me he was in favor of the bill, and the 3rd when he turned his back on so many of his constituents. Considering that Reisinger, Young, and Pugh are all career politicians, that they belong to the same party, ran for office as a slate, and that they work in the same building, the last minute change of heart is a little dubious, and if legitimate, shows a concerning lack of research and communication on their parts.

Pugh said her veto arose from several budgetary issues she inherited after taking office, including the $130 million budget crisis facing our public schools, but this isn’t anything new.  The woman who repeatedly claimed to have “built the first school in Baltimore in 30 years” must surely have been aware of the broken funding formula and the impending BCPS crisis in February of 2016 when she filled out the AFT questionnaire.  Nothing has changed since the council voted to raise the minimum wage two weeks ago, so if Jack Young, Ed Reisinger, or any other members of our City Council were actually swayed by a logical argument against the bill since it was passed, then they voted in favor of it (three times) without doing their homework.  And if the budget deficit is significantly larger than Pugh expected, how will that affect her promises to increase the city’s contribution to our public school system, or her position on city employee’s pensions, both contained in the same questionnaire?

As for the Living Wage Bill, the most likely scenario is that this legislation was an elaborate, taxpayer-funded charade, proffered more for the sake of political expediency than a legitimate desire to help the working poor.  Our City Council and the Democratic Party have the power to take steps toward economic equality. They campaigned on the principle, they put countless (well-paid) hours and considerable tax dollars into debating the issue, and in the end they had the votes needed to raise our city’s minimum wage regardless of a veto but decided not to.  This is what happens when a political party steered by big donors and corporations dominates local politics - the less fortunate are lied to, exploited, and then left to fend for themselves.  Corrupt politicians protect big business under the auspices of fighting for a redeemed social condition.  With Mayor Pugh and the Democratic machine in office the Living Wage Bill was doomed as soon as the polls closed. 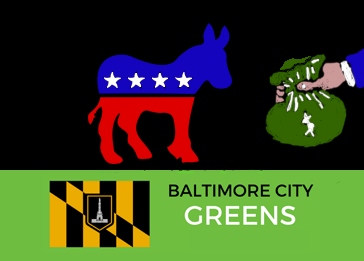 It’s critical that we break the Democratic Party’s stranglehold on our city if we ever wish to see truly improved conditions for the masses and a city government that is accountable to the citizens of Baltimore alone.  If the citizens, trade unions, and community organizations begin to support candidates for their integrity as opposed to their viability, we can counteract the big money influencing our elections and make strides toward a more sensible and ethical political system in which money plays very little role, if any.

Lobby your union leadership to endorse Green candidates in the upcoming election.  Contact local nonprofits and demand that they host inclusive and impartial candidate forums.  Support the local businesses willing to respect their employees without a government mandate.

Baltimore will have the option to vote Green candidates into the City Council and the Mayor’s Office in 2020, but until then we’re tasked with holding Catherine Pugh and the City Council accountable for the promises they made in their pursuit of office.  There were dozens of forums, interviews, and candidate questionnaires in the months preceding the election, and most of this information is easily available online.  Call the mayor, call your councilperson, and demand that they respect their constituents by standing by the promises they made while campaigning for office.  When they inevitably fail to do so, go Green.