Editor's note: This article generated substantial controversy due to the lead author's role in opposing development and zoning code changes and her use of various lawsuits to those ends. This information was unknown to the BGP Editorial Team at the time, and would have substantially changed their views on the article and their decision to publish it. As a result of this mistake, BGP has revised its editorial practices to include a vetting of authors' outside work to ensure that there are no similar undisclosed conflicts of interests or activities contrary to Green values promoted in the future.

Last December 5th, the outgoing City Council and Mayor approved a replacement for our current Zoning Code and Zoning Map, to go into effect on June 5th of this year.

The replacement consisted of a new zoning text, tables, and maps that were known to be riddled with problems but were pushed through at the last minute, by outgoing politicians who refused to leave it to their successors to make important, far-ranging policy decisions about the future of Baltimore. 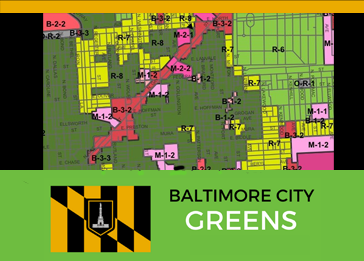 The late stages of the process were marred by unverifiable changes, amendments eliminated or added without explanation, rules ignored, and unlawful meetings.  Waterfront height limitations disappeared.  Map changes were dropped.  What was adopted on December 5th as Article 32 Zoning was an unmitigated disaster.

The outgoing politicians still needed certain problems to be solved and selected amendments to be approved by the new City Council, to meet the apparent expectations of certain development interests — among them Sagamore — by June 5th.

That’s where City Council Bill 21 comes in.  Bill 21, scheduled for a hearing today, has been misrepresented as a “corrective” bill that makes no substantive change to the new Article 32 Zoning.  Bill 21 is actually a policy bill disguised as a “corrective” bill, an apparent back-door effort to get the current City Council to satisfy certain interests.

Here are some policy aspects we see in Bill 21 as proposed by the Planning Commission:

These are not corrective changes; they are substantive.  They are only some of the policy aspects of Bill 21, meant to benefit certain interests that were unsatisfied by what they got on December 5th.

But we all deserve better than what we got on December 5th.  That result should be scrapped, not selectively tweaked to benefit well-connected interests.  Open it up.  Start fresh.

There is no good reason to hamstring the current City Council’s review of zoning policy for the City of Baltimore.  If the new City Council members are capable of participating in certain zoning policy decisions, they are capable of participating in all of them.  If we truly need a new Zoning Code and Zoning Map, there is no good reason to keep rushing to get something in place by June 5th.