Fellow Greens and Green Party Supporters, your support and action are needed.

The Trump Administration is ramping up its targeting of immigrant communities. ICE agents are emboldened, knowing that they do not have to focus on violent criminals. More people, with little to no criminal record, are being swept up in immigration raids (“Immigration Agents Discover New Freedom to Depot Under Trump,” New York Times, 2/25/17). The Obama Administration was hardly a panacea for immigrants, deporting a record 2 million people. However, Obama's stated policy was to prioritize violent criminals and gang members. Under Trump, anyone without documents is at risk, and the Trump administration will look to far surpass Obama's numbers. 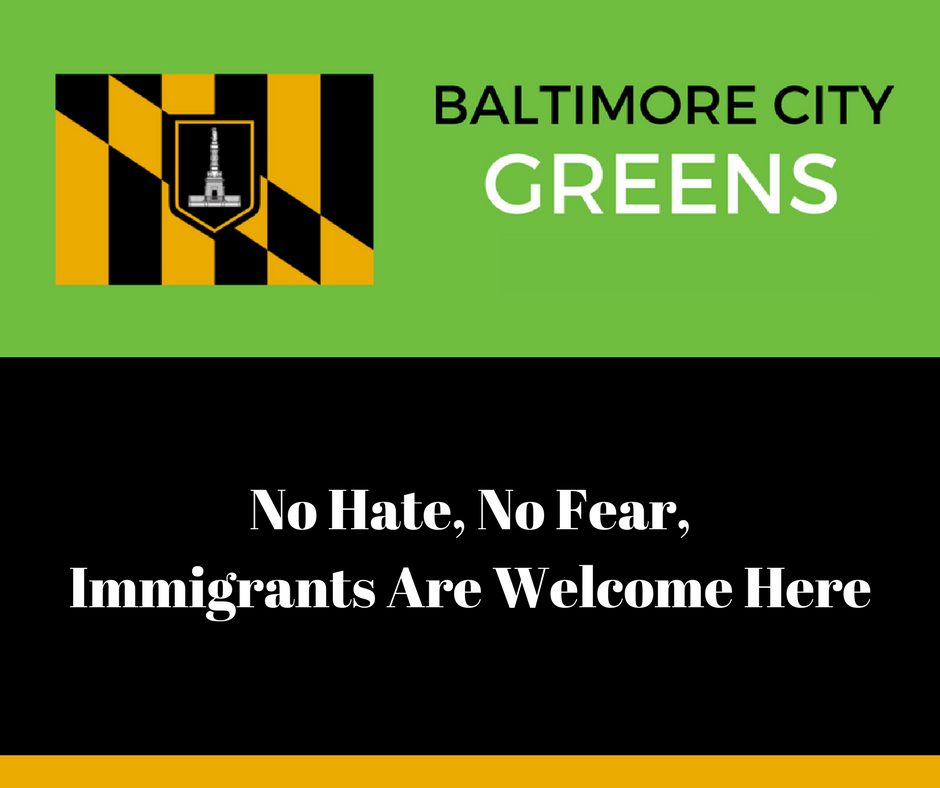 As Green Party members, we recognize that Trump and Obama policies on immigration are wrong-headed and completely backwards. Here are a few statements from our national platform:

“The Green Party stands firmly for social justice for all those living in this country regardless of their immigration status.”

“The undocumented immigrants who are already residing and working in the United States, and their families, should be granted a legal status which includes the chance to become U.S. citizens. Persons should be excluded from this process only if they present a clear and present danger to other members of our society.”

“All persons fleeing political, racial, religious, or other types of persecution must be welcomed and given permanent resident status.”

“We must keep faith with our commitment to the United Nations, to assist in the resettlement, including to our own country, of refugees currently stranded in refugee camps in other parts of the world.”

What the Green Party recognizes is the benefit that immigrants, documented and undocumented, provide to the well-being of our nation. Immigrants not only do important work and provide important services, they spend money, start businesses and create wealth. We can credit ILLEGAL immigration with providing billions of dollars to our social security system, giving it a chance to remain solvent. Furthermore, immigrants add to the cultural and social fabric of society, making it livable. Many of our rural areas, which are dying from lack of opportunity and drug addiction, would be well served by large influxes of immigrants. Immigration is a net gain for our country, and we should welcome and encourage it, as a matter of policy. *(This is not to say that we should not continue to push for better trade deals that provide more humane conditions for workers, farmers and peasants, thereby reducing the economic push factor of emigration/immigration).

While our vision is sound, we have to recognize the current reality. We are nowhere near to realizing a Green Party vision on immigration. Rather, our communities and fellow residents are under threat, and resistance is paramount.

Greens should join with immigrant advocacy groups that are resisting the Trump agenda.

Many advocates are calling for the passage of the Maryland Trust Act (HB1362/SB825), which would make Maryland a “sanctuary state.” Specifically, the Trust Act would:

I would urge Greens to support the passage of the Maryland Trust Act. It contains important provisions that will help prevent deportations and allow people to feel safer. It is not clear how Maryland would “institute policies” to provide protection from the Feds at schools, hospitals and courthouses, but nonetheless, it remains a bold step in the right direction. We should join with others to support the Trust Act.

Even with the passage of the Trust Act, our communities would still be under threat. Therefore, do not stop there.

It is my hope that Greens across the U.S. will speak loudly on immigration, and will participate actively in the defense of our undocumented fellow Americans.

Diversity is strength. Immigrants are who we are. Defend America from the Trump Agenda. Show America what it means to BE GREEN on immigration in the era of Trump.

Thank you for your support.