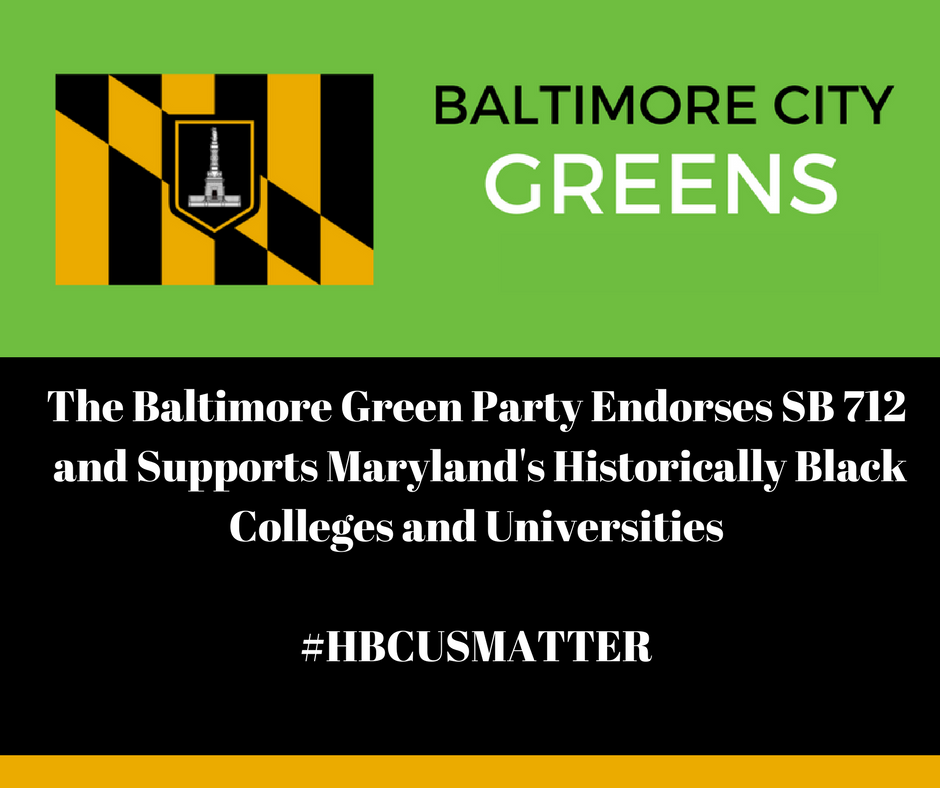 Maryland’s actions have ensured a segregated, dual educational system that is racially discriminatory and that continues a system established during the era of segregation. The result of Maryland’s actions is illegal discrimination against black students that undermines not only HBCUs but the predominantly African American communities living where these schools are located.

The Baltimore Green Party endorses SB 712, which will begin to correct the long-term racially unfair actions of Maryland by providing supplemental financial assistance to HBCUs to ensure they are comparable and competitive with the majority white four-year public institutions in Maryland. The state needs to give HBCUs the resources they require to succeed because doing so is in the best interests of all students in Maryland.

Maryland must also end unnecessary program duplication that they have put in place and return important courses of study to the HBCUs that they excelled in. This is how higher education has been desegregated across the country and must be part of the solution in Maryland. Maryland needs to put into practice the truth that HBCUs are an integral part of building excellent colleges that serve all people of Maryland. Rather than diminishing HBCUs, it is time for Maryland to advance them.

The state should also accept the decision of the federal court in this more than decade-old litigation and not appeal the decision. It is time to put this lengthy litigation, which began in 2006, behind us by the state correcting the serious and egregious racially discriminatory policies. It took Maryland two years to merely propose a settlement and the judge found that proposal to be inadequate.  Now it is time to stop delaying and to put in place integrated and complementary programs along with adequate funding to correct Maryland’s historic discrimination. This should be seen as an opportunity for the state of Maryland to build a public university system that better serves all Maryland residents.