Overcoming a litany of obstacles from the property management, longtime social justice activist and Green Party member Reverend Annie Chambers won an election to the Resident Advisory Board (RAB) of the Baltimore Department of Housing last week. Just days before the anniversary of Dr. Martin Luther King’s assassination, a local civil rights champion was elected to represent the people of Douglass Homes -- named after Frederick Douglass, who has roots in Baltimore -- and serve as the 11th member of the board. 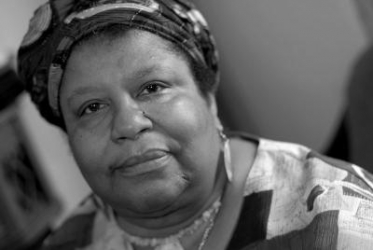 Reverend Chambers was born in 1942 and marched in the 1963 March on Washington. On the march to the event she actually gave birth, went to the hospital and delivered, called her father to come get the baby and continued the march. She has been an activist in Baltimore for more than 50 years, involved in the Civil Rights Movement and the Black Panthers. She is best known for her four decades of work as an advocate for welfare rights, housing and civil rights.

It was her long involvement in these issues that created the relationships that aided her election. She has served on the Tenant Council for Douglass Homes and on the Residents Advisory Board (the position she won in this election) before. For the last few days before the election on March 30th, members of the Baltimore City Green Party joined her in going door-to-door in the community as well as working at the election poll with her and others.

This election was important for the residents because of increased development in the Douglass Homes area. The area is between the Johns Hopkins Medical Campus, East Harbor and downtown Baltimore, not too far from the weekly community market under I-83. The city just awarded land to be developed in the Oldtown community just a few blocks away and Dan Henson, a developer who previously held the dual positions of Commissioner of Housing and Community Development and Executive Director of the Housing Authority of Baltimore City, along with Beatty Development and other developers bought three parcels for $400,000 in the area. The city plans to sell additional properties for development.

There is no word on whether Douglass Homes will survive the development plans, but the residents are concerned about their futures. Having Chambers on the RAB will help them know if changes are coming. She is experienced and tenacious when it comes to protecting the rights of people in the community. The people of Douglass Homes know they can trust her to represent them and let residents know what is going on.

The Baltimore Green Party is committed to economic, environmental and racial justice for Baltimore and beyond. Our goal is to give voters a chance to elect leaders who put people over power and profit, and fight for a more just and sustainable society.